In early summer, most parts of Japan get visited by a rainy season, the so called tsuyu (or baiyu), literally meaning “plum rain”, because it coincides with the season of plums ripening.

The rainy season is caused by the collision of cold northerly and warm southerly air masses, which results in a relatively stable bad weather front over the Japanese archipelago for several weeks. 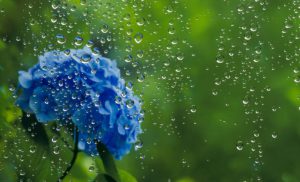 In most of Japan, the rainy season lasts from the beginning of June to mid July, while it affects the islands of Okinawa about one month earlier. Only Japan’s northern most main island of Hokkaido gets barely affected by the rainy season.

The following table shows the average starting and ending dates of the rainy season for selected regions of Japan, according to the Japan Meteorological Agency:

During the rainy season it does not rain every day. In fact, Tokyo registers only an average of 12 rainy days in June, while 120 hours of sunshine are recorded. As for the amount of rainfall, it varies from days with intensive downpours to other days with occasional sprinkles.

Nevertheless, the rainy season is not the most suitable season for visiting Japan, even though it can have its advantages. For example, travel activity is rather low during June, which clears many popular outdoor attractions from the many visitors that are usually present.

Rainy weather and fog make for a most atmospheric visit to the wooded temple mountain of Koyasan and Okunoin, in particular.

The chances of viewing Mount Fuji may be low, but the lush vegetation and hydrangea flowers are twice as intensive in rain than in dry weather.

There is nothing more relaxing than sitting in an open air hot spring while viewing the cloudy landscape and listening to the patter of the rain.

Those who prefer to escape the rain, should visit Japan’s northern most main island of Hokkaido, which gets barely affected by the rainy season.